It looks like there are a number of fans using this remote.

If looks like the fan controller used in these fans is made by: Shenzhen Funpower General Technology Co., Ltd 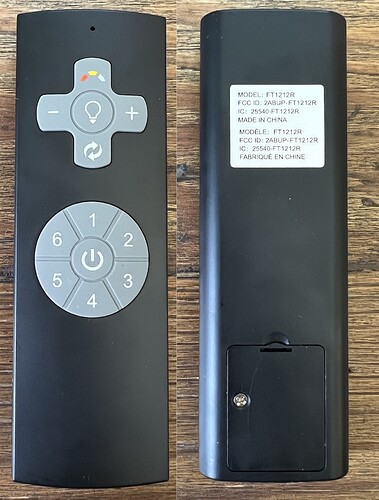 Right now when adding this fan manually, there is no way to control brightness nor to change color. Ideally there would also be a way to turn the fan and light on/off without the toggle, and possibly set direction without toggle as well. But I realize this may not be possible.

Any chance of adding support for this fan?

If not specifically supporting this fan, any chance of adding support for the buttons that are not currently supported in the app (for example the light colors and dimming)?

I haven’t seen the Bond staff jump in this thread, but I can give a suggestion or two.

If you wanted to ADD a new device (so you don’t mess up what is working so far) and manually record the buttons that are missing, choosing “closest name” or writing down what you recorded them ‘as’, then you can go in through the API and rename the buttons.

Experiment with manually recording those commands as a (new) Fan or Fireplace and see if that works as a stopgap until the Bond staff are able to lend more insight?

Thanks @residualimages ! This is a good idea, I’ll check it out this weekend.

Right now I have 4 of these fans in one room. The problem is that I didn’t realize as I was installing them that I was programming them with the same remote (well, I did realize this, but, I didn’t think it through). This would be great, except that they get out of sync because the circulation/lights/light color are toggles - so some of them are going clockwise, and the others are counter clockwise, and some lights are on, some are off, and different colors