I have been all over this forum, hue, smarthings and have spent countless hours on the web looking for a either a universal remote control w/receiver or just the receiver that fully integrations with bond with the following features:

I have seen all the URL links to home depot wifi remotes which no longer exist except for the following:

But this says hubspace not bond

Bond no longer lists their compatibility they point to a generic FCC ID database lookup. However, to get the FCC ID off the remote you actually have to buy it. Seems a little ridiculous that when I don’t have fan with a remote currently how do I enter an FCC ID?

Tried the Smartthings approach also and since no one sells a tasmota flashed ceiling fan controls either - there appears to be no solution currently that meets these requirements. All of their links are to products no longer for sale either

Can anyone point me to a current link where i can actually buy a remote/controller or controller only module that works out of the box with Bond and meets the above requirements?

Any help would be appreciated.

Some people can still find the Home Depot kits that are Smart By Bond integrated (no Bond Bridge needed), but many of us cannot.
As you found, the Hubspace one is more readily in stock but is not the “correct” kit.

Chris Merck from the Bond staff mentioned another kit awhile back that has discrete commands that can be integrated with a Bond Bridge.

EDIT: All those universal kits assume an AC motor for the fan (not a DC motor) - likely true for your case since they don’t have remotes originally (assuming you have the physical pull chain speed change?)

I have used this 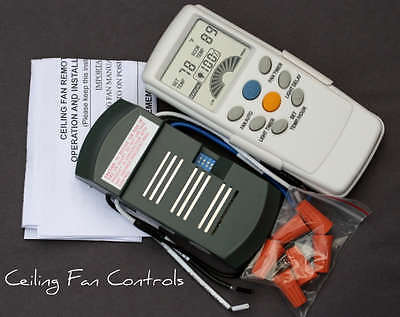 Find many great new & used options and get the best deals for Thermostatic Ceiling fan and Light remote control at the best online prices at eBay! Free shipping for many products!

And this is still available from Home Depot
https://www.homedepot.com/p/Westinghouse-3-Speed-Thermostat-Ceiling-Fan-and-Light-Remote-Control-7787400/203077362?

I am not sure what some of your terms mean, but I have the first one on Bond and it works well. I do use Alexa, I don’t think you have to use her.

Even though the control has a light toggle, there are also on and off commands that I use.

I have not gotten the second one. The control just looks the same as the Hampton Bay one I got from HD a while back.

There are still some older ones available on eBay.