Looking at the universal remote from Home Depot

@alexbk66 - if you run a “Hue emulator” (I believe there are several options, depending on your smart home controllers / hubs), you can add additional unsupported devices to Harmony by tricking it into thinking it’s a Hue.

For my particular setup, I use a Polyglot nodeserver version of a Python based Hue emulator running on a RPi for my ISY994 controller, which is also using Bond’s local API to integrate. I manually set up specific virtual devices in ISY, and expose them as Hue lights through the Hue hub emulator paired within Harmony, and in Harmony I can associate them with the home control buttons; the virtual devices exposed as Hue lights work as triggers to run programs on the ISY.

At the end of the day, the home control buttons on my Harmony Elite work as designed (short press to turn on, long press until vibrate to turn off) - and I also have wireless 8 button Insteon remotes with custom printed labels which hang out next to each room’s physical switches. Because the controls for Google Assistant, Hue emulator, and Insteon are all being handled via my ISY, they (mostly) play nice together (note that I typically do not use Bond’s native Google Assistant integration because of this complex setup).
I even have a double tap on the Insteon remotes able to flip the state belief quickly for the devices Bond is tracking, so I don’t have to open the Bond app very often.

Thanks again - I actually have the bond bridge but unfortunately not being able to track the state is creating problems with my Control4 setup. I went that route for the exact reason you mentioned above to keep the existing remote just for reverse settings twice a year and got excited when I saw this option as each receiver has its own ‘bridge’ and reports the state (from what I’ve been told). Grr, hate the trade off of having one or the other. . . Oh well, these were worth exploring at least Appreciate the assist!

Keep your eye out - as these SBB universal kits may eventually have a “version 2”, or some other company (besides Hampton Bay / Home Depot) may make a kit, too.
Maybe those hypothetical options will have a reverse; technically I don’t think there’s a reason they couldn’t.

Since you have Control4 - could you not have physical switch and/or remote alternatives, as well as voice assistant integrations and occasional Bond app use, be the only way folks in your home interact with the fans and lights in your home? Bury the original remote in a drawer except for the twice a year you have to change direction?
If you don’t ever use the original remote, then Bond tracking state works very well.
That’s actually what I have in my home - 3 fans/lights are OEM receiver controlled via Bridge (original remotes in a drawer but Insteon and Harmony remote control available), and 2 fans/lights controlled with the universal SBB remote kit.

if you run a “Hue emulator” (I believe there are several options, depending on your smart home controllers / hubs), you can add additional unsupported devices to Harmony by tricking it into thinking it’s a Hue.

That’s pretty cool idea, I found a couple of C# Hue emulators on github - I may try creating HomeSeer plugin for this…

Again, great info - V2 would be fantastic if it did that. Meanwhile, my issues may be. Ore programming related and I’m having someone look at that but thought these might be a good option with state reporting to solve that. The cost would probably be about the same once all was said and done but liked the individual ‘bridges’ making things easier.

We don’t use the remote at all - haven’t even used it to change direction yet - just trying to get everything working right first.

Thanks again - will keep my eyes peeled for V2!

Full disclosure: I don’t have any knowledge of any theoretical V2 or anything, but just assume that Home Depot / Hampton Bay may make a new version eventually. Or some other company might?

Let us know if you have any more questions, or how it all comes out for you in the end.

You will only get the direction/reverse control on DC fans, or if the AC fan has an internal reverse relay (usually more expensive fans - ie. Minka-Aire, etc). If the fan has a pull/chain switch to reverse, typically it means no internal relay, and therefore no remote control of reverse function.

Our fans definitely have the internal relay as there are NO pull chains or switches that I could use even if I wanted to. That’s why this is such an issue. If I install this product, the fan motor has the capability to reverse direction but the rf receiver/module doesn’t have the capability to control the direction so I would lose the ability to adjust the fan direction. Makes no sense to go that route, Hopefully this was an oversight or maybe a difficult programming issue due to different manufacturers and motor types but I would strongly urge attention to this detail for anyone looking to create a V2 or beyond. Thanks again for ll of your input everyone!

Indeed users with a manual (pull-chain or switch) reversing AC fan are much better off when it comes to options for making their fans smart.

All the DC fans we’re putting Smart by Bond into have smart reverse. It’s not just Minka Aire anymore, but also Hinkley, Star Fans, Progress Lighting, and others launching soon. Honestly the best way to go if you want to have a Control4 system assert the correct seasonal direction on your fans so you don’t need to manually futz with it twice a year.

Yes, but almost all lights work the same way (toggle).
If ensuring the appropriate fan direction is an imperative, one may take the remote control wand and hide/not use it.
AC fans typically do not have the reverse direction relay integrated into the fan since it requires logic to first spin-down the motor prior to changing the direction which adds $$$ to mfg cost. A buyer needs to ascertain that a fan has remote reverse capability before purchasing, or just purchase DC fans, since most have the capability (confirm first).

I’m not sure I agree with the direction toggle being an issue. I think the direction function is typically used less frequently (seasonally) and having the state identified isn’t as important as lighting and fan speed. Just my $.02

From a customer looking to automate as much as possible, I am really stuck with no direction change ability with this remote/receiver combo. But my Bond bridge allows direction reverse when learning from another remote.

It really leaves us in a pickle if we don’t have a pull chain - should we just ignore fan direction? Once the original receiver is removed and this one installed, I will have no way to reverse. Makes it a tough sell. Wish I didn’t have to compromise between having the ability to reverse and getting the states identified fir each receiver - would be better with both functions.

These do reverse fine. It is the breeze function that reverses it. I do use mine w c4 but I don’t believe reverse is an option in c4

Hey Mitch! So if I only need to reverse direction seasonally, you’re saying I can use the remote that comes packaged with this setup? I’m confused about the button on the included remote - I thought that was so the fan ‘mimics’ wind by speeding up and slowing down. Are you able to change that function? I didn’t see anything in the instructions. C4 integration for reversing isn’t a big deal if I can achieve that with the included remote. I think having two way feedback and knowing the state of lights and fan speed are more important for integration. Thanks! 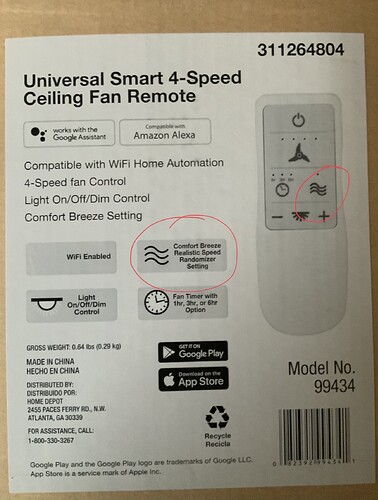 So your button that shows here as ‘comfort breeze’ doesn’t send a comfort breeze command? It sends a reverse direction command? Confused. . .

Bumping to see if anyone can answer the above. Sounds like some of these setups work with the reverse function instead of the ‘comfort breeze’ but how would one be able to confirm? I have three of these waiting for installation or return. Thanks in advance!

Author of the firmware here… It’s definitely breeze, not reverse.

That said, it is conceivable that the breeze feature is somehow triggering the reverse module logic inside @ghctim 's fan, but that’s a totally unpredictable / non-repeatable thing.

There is not, as far as I know or see, on the Home Depot / Hampton Bay universal kit you found (I have 2).

That being said, you can buy the “BD-1000” Bond Bridge (a first party device this company actually makes, which Home Depot (help: home depot customer service) and other retailers do sell) and keep your existing RF remotes and receivers, assuming they are compatible.

See here if you’d like to see pros and cons of Bridge, vs using the kits you found. That post’s tone makes it sound like it is almost making the point against the Bridge - but if there are additional or unique features on your existing remote/receiver (such as more speeds, reverse, upper and lower lights independently controlled, etc), that’s where the Bridge shines. Just try to avoid using the original remote if you use the Bridge’s “track state” feature - replace with voice assistant calls, Bond app controls, or third party smart home integrations (Z-Wave or WiFi switches, or hacking other remotes [Insteon and Harmony are the ones I’ve done]).

Thanks a lot for your replay

I have had some instances where a certain key press sequence triggers the reverse so it does seem feasible to do woth a command.
Is there a way to update the firmware to allow for this on a command?

There’s two problems, one conceptual and one hardware: The conceptual problem is, different reverse modules use different timing to signal the reversing. Some even use a digital communication using differential phase cutting. There’s no standard. So we couldn’t release a firmware with a reverse option that would work.

The hardware problem is, in this product (MR196W) there’s two MCUs: the WiFi module and the motor/light controller. Only the WiFi module is OTA upgradable. The communication from the WiFi module to the MCU only allows adjusting the speed and brightness. There’s no way to get a repeatable waveform on the motor line. It would have poor timing reproducibility and could cause intermittent behavior.

Bottom line: don’t buy an MR196W to control your “remote reverse” AC fan. You’ve got to have a manual reverse switch or pull-chain reverse on the fan. — If you want smart reverse, you’d need a new fan (there’s many Smart by Bond models available now).