Bond with Hubitat: Somfy MY Settings

Bond Bridge (standard) has all 3 of my Somfy motored devices (1 set tilt-blinds, 1 set cellular roller blinds, and 1 full curtain) operating perfectly in Bond app, including the MY settings. I used the built-in integration in Hubitat, and it integrated well… I’m able to “see” all 3 devices, and they can Open/Close from Hubitat app. What I cannot seem to figure out is how to do the MY settings in Hubitat. I found an old thread on the Hubitat community, which seemed to say to use ‘SetPosition’ to 50%, and that would be the MY setting, but I’m not sure if I did it correctly because it’s not working. I see ‘SetPosition’ within the configuration for each device: 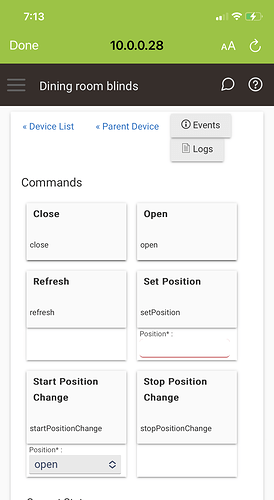 But entering ‘50’ in the configuration doesn’t work (it won’t save with the 50 staying there). Next I tried creation of a RulesMachine rule, but the ‘SetPosition’ doesn’t work there either.

What do I need to do?

Next I tried creation of a RulesMachine rule, but the ‘SetPosition’ doesn’t work there either.

Here’s where I tried to ‘SetPosition’ within the RulesMachine rule:

The old post you would have seen would have been for the custom integration that was originally developed by Dominic. I am not sure what the arrangement was when Hubitat introduced their built-in integration, whether it was a direct copy of Dominic’s or they developed it from scratch.

I am still using the custom integration and can use the 50% position to have my awnings come to the MY position. I haven’t tested the new built-in integration provided by Hubitat.

If you haven’t done so already, I would suggest positing on the Hubitat Community forum as it will be the developers at Hubitat who will need to look into this for you.