In Hubitat logs, "Translating 1 to Bond" every 1/2 second

I have noticed this recently in my Hubitat logs. I haven’t noticed the Bond not working but it is “Translating 1 to Bond” every 1/2 second in my logs. I don’t know what that actually means but it can’t be a good thing that it is taxing my hub every 1/2 second when I am not doing anything with the fans. I rebooted the Hubitat hub and its still doing it. I posted same in the Hubitat Community Forum. 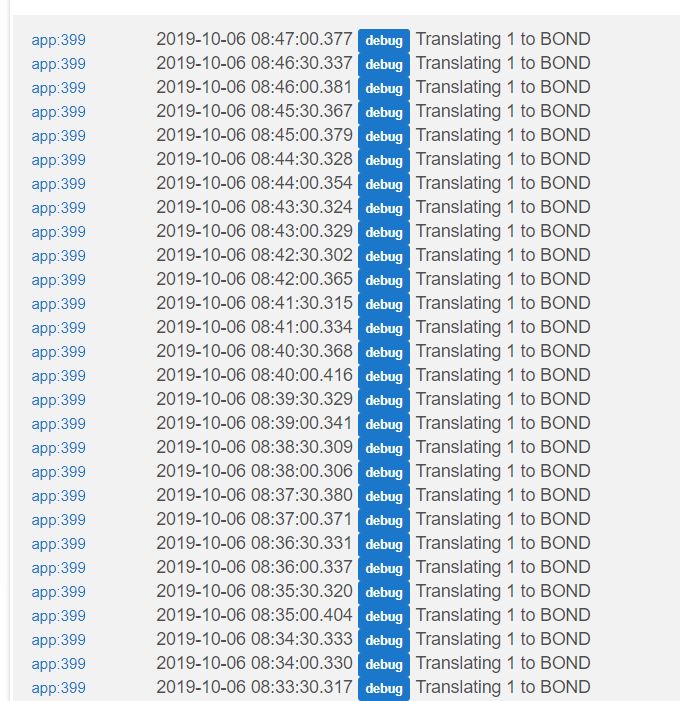 It was pointed out in the Hubitat forum that I misread logs and it’s every 1/2 minute, not every 1/2 second. However, I am pretty sure the “Translating 1 to Bond” didn’t show up that often in my logs previously. Any idea what that means and what it is doing with the hub?

Maybe @dman2306 can shed some light on this.

@jacob @Stephen_nutt this was also asked on the Hubitat forum so I already followed up there. That being said it is actually every 30 seconds not every 1/2 second. This is how frequently the app polls the hub to get device status. Once you guys add the TCP support for “pushing” device state changes I’ll update my integration to remove the need for polling.

@dman2306 - definitely not my wheelhouse but can you customize the debug message to say something about “Hubitat plugin polling Bond for any device changes (to be optimized in future release)”, or similar?

I was happy to get an answer straight from @dman2306 on the Hubitat forum where I published the same question. He was also able to confirm the meaning of the log entry. Thank you, issue solved.

definitely not my wheelhouse but can you customize the debug message to say something about “Hubitat plugin polling Bond for any device changes (to be optimized in future release)”, or similar?

I could but I don’t see a reason to. It’s debug logging. That really means it’s for me. Meaning if you have an issue, you send me debug logs to investigate. That log is letting me know what it’s doing, translating one of the BOND fan speeds to an HE fan speed. That’s the information I need as a developer to troubleshoot certain issues, not to just know it’s polling. Also I have no idea when the future update is coming. Could be a week, could be a year, I guess it could be never! No idea the priority for the BOND team.