I see that you can add custom buttons for generic remotes through the API, is there a timeline for when this might be possible through the app instead?

I have an RF LED strip that I added but only has power toggle, I’d like to be able to control brightness, mode, and color which are on the remote it came with.

We’ll see if the Bond staff see this and respond about future roadmap / timelines.

Actually, recording net new custom commands is something I haven’t been able to do via the API - because I can’t make custom Actions via the API any way I’ve tried.

So what I’ve ended up doing is manually recording as a more full featured device, choosing buttons that are approximately named something reasonably close to the real remote’s button and/or noting down what I chose for each, and then renaming buttons afterwards to be more intuitive.

If you manually record, without database matching, the LED strip’s commands under a Fireplace or Ceiling Fan device, rather than a Generic Device, you can get more buttons.

If you are lucky enough to be able to choose buttons that make sense as is for the respective commands, awesome. If not, you can use the API (I know, you mentioned wanting to do the changes without it) to rename.
See here for an example - note it was for an IR device, but works for RF as well

This is my “fireplace” that is actually an RF lamp with brighten, dim, and color changing - in addition to power on/off. 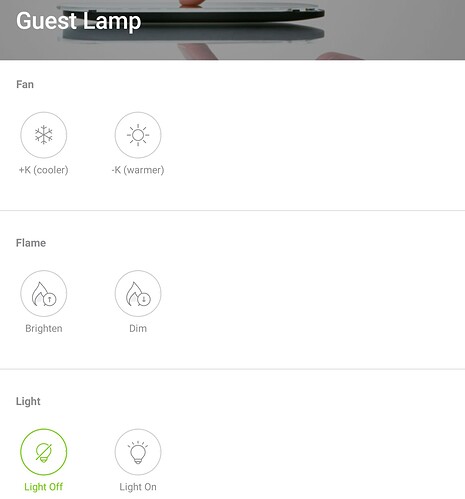 I’m a new user and surprised by the lack of customizations under the “devices” category within the app. Was coming here to see if there was a way to add custom labels, etc.

@Charlie - did you find my examples of current state workaround solutions helpful?

I know long term plans from the Bond team hope to include a user-submission library of custom remotes, which would imply more expansive native options eventually.

Yeah I had already came to that conclusion rather quickly for things that didn’t fall under their given categories. The OCD in me is a little annoyed that there wasn’t more customization/buttons and additional categorizations within the Bond app itself and my disappointment probably won’t change until they start addressing expanding the bridge’s capabilities.