I though I had read the Bond device has IR capabilities as well as RF, are they active currently? I have an IR Fan/Light switch which I tried to pair to Bond but couldn’t a month ago when I last tried. Thanks.

Good question. We’re just about to release a BETA build with a “Force IR” feature, where you can override the default Ceiling Fan scanning which only looks for RF.

Out of curiosity, what kind of switch is it? Make/model?

I saw the request in Test Flight to update the app then force on IR. I did that and updated the firmware on my Bond and tried to teach it this remote, although it did see the input this time it didn’t work when i tested the button after learning. Thanks.

Wouldn’t IR require bond to be in the same room as the fan?

Yes, I have mine in my Family Room where the majority of my IR devices are

I tried adding my IR light and fan, however I ran into a number of issues. I forced the IR then told it to learn but I only have the option of light (toggle) and direct fan speeds but my remote has discreet light on, light off, light brighten, light dim, and favorite, and the same for the fan functions. Also when i tried to tech light it would blink blue then shortly after it would blink orange even though I hadn’t pushed anything yet. After trying multiple times it finally went green and it actually learned on correctly. However no matter how many times i tried to teach it off or what button i chose to pick it wouldn’t learn it.and mine seems to error out when trying to teach it IR more often than not.

Hey Terk, thanks for the info on the new controls required. Can you post a photo of your remote control? We can add the appropriate control icons to the options available.

Regarding the false IR recordings, this is an issue. What’s happening is that there’s almost always IR noise in the environment, and the BOND picks up on it. You need to press the button on the remote very quickly after the BOND goes flashing blue (recording mode). We are working on having the BOND filter out noise and only react to packets, so that this process will not be so finicky. I think we’ll have something in BETA a week from tomorrow.

Here is the IR remote. 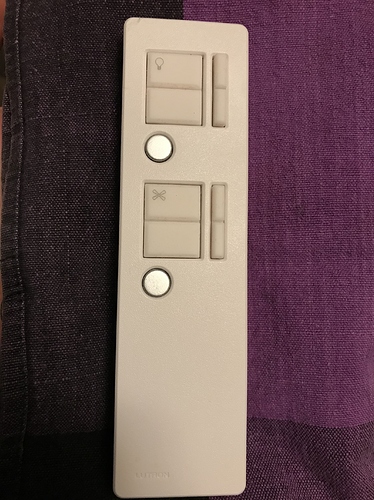 I was able to tech all of my functions from the IR fan remote by hitting the button to teach as soon as the ring flickered blue. It would be nice to have the discreet light on, light off, light brighter, light dimmer, fan on, fan off, fan faster, fan slower, and favorites for both the light and fan as options to tech that Alexa can control as well.

For now I taught power as fan off, sped 1 as fan faster which also turns the fan on, speed 2 as fan slower, random as the fan favorite, top light as light on, bottom light as light off, and light as light favorite. I don’t use the light dimmer much so I haven’t bothered with that yet but would likely use speed 3 and 4 for now.

We just released BETA apps which include firmware (v1.110.3) that makes the BOND robust to IR noise. If you have the time, can you try recording a new IR device, and let us know if the process is smoother for you?