Does anyone make a RF kit that has separate ‘Light On’ and ‘Light Off’ buttons?
I’ve looked in all the normal places and have come up empty.
It would seem that this would fix the status issue that plagues Bond Home users.

I need to be able to send an OFF command and be certain the light is off regardless of its previous state.
All the remotes have an OFF button for the fan but not the light.
Thank you.

There may be some other options, depending on what other control systems you have (Z-Wave, Insteon, etc). Other than those options, I guess your best bet would be a WiFi enabled receiver.

Because the issue with any universal or OEM-based kit that isn’t smart by nature but is just ‘dumb’ RF is something Bond Bridge tries to work around with its own state tracking, but it is imperfect, as you know.

Bond does license its technology to vendors to include in their own OEM systems, as well as people who make universal kits. These universal kits are only good for AC motor based fans, FYI, but could get you what you want.
Home Depot sells one of these kits which tracks its own state correctly: 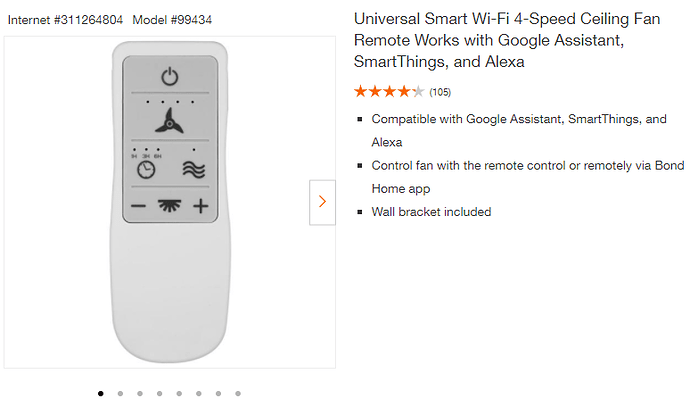 this universal remove is not smart, but is still packet based. e.g. the bond send a full set of state is expects the fan to be in every time a command is sent.

So while the controller itself doesn’t have discrete on/off buttons, they are available to bond (and the lcd controller also has its own state tracking, which can get out of sync with the bond.)

unfortunately this one doesn’t seem to be commonly available

edit: check this one: https://www.amazon.com/dp/B073JPCL1G/ that might do the trick.

So I never found a perfect solution and ending up purchasing a Harbor Breeze model with an RF remote.
[https://www.lowes.com/pd/Harbor-Breeze-Hydra-70-in-Brushed-Nickel-Indoor-Ceiling-Fan-with-Light-Kit-and-Remote-8-Blade/1000384303]
This model incorporates the receiver in the motor housing. I thought this would make installation easier with only Hot, Neutral and Ground needing to be connected in the canopy.

This receiver location SIGNIFICANTLY REDUCES THE RANGE of control. Neither the included remote nor the Bond Bridge would control the fan from 2 rooms away.

Any suggestions on what I can do to improve range?
Thanks in advance.

You didn’t like the idea of the Bond retrofit kit, or it wouldn’t work for your existing fan?
I ask because while the Bond retrofit remote has a toggle for light on / off, the receiver part of that retrofit kit does have discrete on / off state awareness built into it - so if you had said turn light off and it was already, it wouldn’t have turned on (whether that was via an API integration or via a voice assistant).

Anyways, based on what you have now - can you move the Bond Bridge closer to that room? Or does that cause unwanted signal drop outs with other devices you’re trying to control with the Bridge?

Any suggestions on what I can do to improve range?

You could try temporarily lowering the metal canopy cover, so that the electronics and ceiling bracket are exposed. Then see if it changes the range.

Hi merck -
This would be a great suggestion if the receiver was a separate unit unit mounted in the canopy but this particular unit places the receiver in the motor housing. There is no way to access it without serious disassembly.
There was also no way of knowing range was going to be an issue until after the installation.
I will probably end up purchasing another Bond Bridge as moving it reduced reliability on the far side of the house.

Rant in 3…2…1…
I really hate the current offering of ceiling fan ‘smart’ devices. Manufacturers either assume you have 2 circuits or want to provide an RF unit without discrete buttons and don’t get me started on dimming.
Why is this ubiquitous home appliance being ignored?
Simple solution:

places the receiver in the motor housing

Ah yes, a lot of DC motor fans do this. You’re only option then is to get a Bridge close enough to the unit to operate it. We do the best we can with the Bridge transmit power within legal limits, but then it’s up to the receiver to not be deaf!

Why is this ubiquitous home appliance being ignored?

That’s why we say on our About Us: Our current focus is thoughtfully connecting certain often-overlooked household appliances: specifically ceiling fans, fireplaces, and shades.

With the help and trust of our community and brand partners, these appliances are ignored no longer!